About The Goodbye Good Girl Project™ 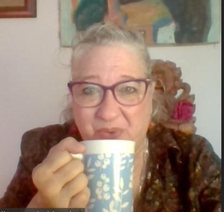 And realized that I needed to understand authenticity from a much more profound place.

And when I did, I began to succeed. It required powerfully and fearlessly questioning everything - beliefs, assumptions, doubts.

And now I am change agent - in businesses, with leadership teams and with individual women leaders. But I was always been a change agent - just unintentionally so. I was the kind of "big energy" that caused problems when I worked in offices. My bosses who feared for and endlessly protected their position of power automatically created discord; they mistook my commitment to my work as a drive to overtake their place in the company.

With the energy of self-determination, the worldly powerful fear that what you want is what they have.

The truth is that I have never wanted their kind of power, and that is because I don't see it as the true kind of power that transforms, elevates, solves and sustains.

I have never wanted to be a part of a pack and find my place of security and just squat there, never quite satisfied. This has proven to be an adventurous path to walk, but walk it I have. I do make conscious choices to do so, but I still have moments or months where I wonder if I have any say in it at all.

And I do. I have chosen to walk a path that leads to me being all that I am, right out loud. And to having incredible choice. It's just not the kind of choice that we generally understand: it's not the "chocolate or vanilla?" kind of choice, but the choice to be who I want to be - need to be - and the choice to align myself with the experiences, commitments and internal communication and "temperature" I need to make a positive difference during my time on earth.

It all started when I was a kid. My mother used to say, "You are too opinionated," and I would respond, "Too opinionated for what?"

In my 30's, I would become a professional actress, lured and enraptured by the live-wire emotional experience of walking out onto a stage, being emotionally naked, and courting at any moment the complete loss of the script in my head. It is free-falling, and it is one of the more alive places in life you can safely inhabit!

I became a jazz singer. Put me on stage anywhere, hand me a microphone, and I'm happy. I just want to connect with you, with the audience, and share authenticity, warmth, encouragement and joy - and that is what happens when I am on stage.

In my first effort to combine my creativity and my need for security, I became a Marketing Virtual Assistant, teaching myself social media when it first emerged on the scene. Later, I created Womanpreneur Digital Agency, taking on video editing.

Predictably, I became a writer - self-publishing what will soon be three books - and an artist, painting designs on everything from paper to chairs, and offering my artwork online. I have been writing and drawing since I was 5 years old.

I became a public speaker (of course); remember, put me on a stage anywhere, with a mic, and I'm happy...

I became an Acting Coach, a Self-Expression Coach, something else I called being an Emotional Linguist™, and I started coaching Women Leaders in the kind of empowerment that is experiential and personal.

So, what was the core of these experiences? What could I safely "call" myself?

I am a change agent for Leaders, Leadership Teams, and Women Leaders. I see the good and the bad of the systems in which we live, and how we are invisibly held captive - struggling against the bonds that stop our courage, our considered risks, our efforts to try to be something new, someone new!

I see where individuals are bound. I see the possibilities that call to us - those of us in business who want to do better, in a newly defined world. But I don't believe we should define it as we have done up until now. That time is past.

​“I have coached financial entrepreneurs, performers,
attorneys, and business visionaries in self-expression,
helping them deliver their message with greater
self-confidence, personal style, impact and joy
than they ever thought possible.”
Ready to rock and roll? Contact Lori at Support@GoodbyeGoodGirl.com.